Hampshire, IL – August 20, 2015 – Canterbury Farm is pleased to announce its sponsorship of several upcoming equestrian events as competition around the country heats up moving into the fall season. Canterbury Farm has extended its support to the Chicago Hunter Derby, the Capital Challenge Horse Show, and the Illinois Hunter and Jumper Association Year-End Finals.

Owned and operated by the Franklin family, Canterbury Farm is a nationally renowned hunter/jumper training facility based in Hampshire, IL. For more than 30 years, Canterbury Farm has dedicated itself to providing exceptional service to its clients by offering personalized training and care for both horse and rider.

Led by head trainer Greg Franklin and trainer and rider Caitlyn Shiels, Canterbury Farm has a roster of incredible clients that support their team. The Franklin family as well as the Durpetti family, clients of Canterbury Farm, are committed to sponsoring different events around the country in order to give back to their chosen sport.

Michelle Durpetti and her family sponsor events both in partnership with Canterbury Farm as well as individually. The Durpetti family owns Gene & Georgetti, a renowned Chicago steakhouse that they have operated for 74 years. Each summer, Gene & Georgetti sponsors a luncheon during the USHJA International Hunter Derby at Showplace Production’s Spring Spectacular Horse Show. This year, they are thrilled to sponsor the Chicago Hunter Derby, held over three days from September 4 to 6, at Annali-Brookwood Farm in Antioch, IL. 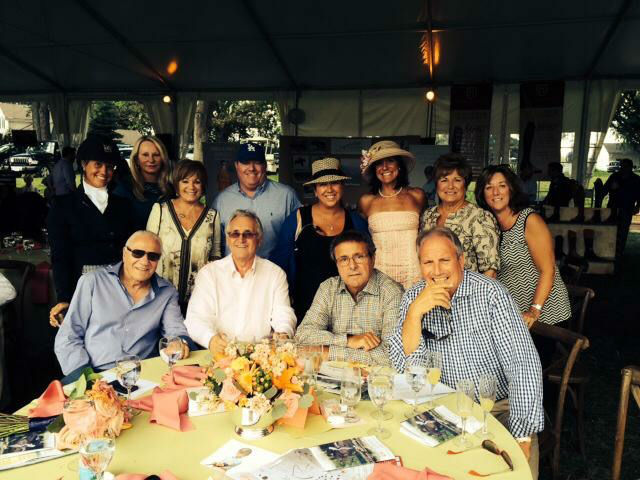 Caitlyn Shiels and Greg Franklin with the staff and family of Gene & Georgetti and WGN TV’s Dina Bair, who served as emcee at the 2014 Chicago Hunter Derby.

Hosted by Chicago Equestrians for a Cause, the Chicago Hunter Derby features some of the finest hunter competition in the nation with all proceeds supporting the University of Chicago Cancer Research Foundation, Ann and Robert H. Lurie Children’s Hospital of Chicago, and the United States Hunter Jumper Association (USHJA) Foundation. Gene & Georgetti is a presenting sponsor of Saturday’s activities, which include the $5,000 National Hunter Derby in its entirety as well as the first round of the $50,000 International Hunter Derby.

Canterbury Farm also sponsors the Chicago Hunter Derby each year. In 2014, they supported the newly formed Score 90 Challenge, which asked barns, businesses, organizations or groups of individuals to pledge a dollar amount for every score of 90 or above given to a horse and rider combination during the National Hunter Derby or International Hunter Derby. The USHJA Foundation has since adopted the idea as a nationwide fundraising mechanism. 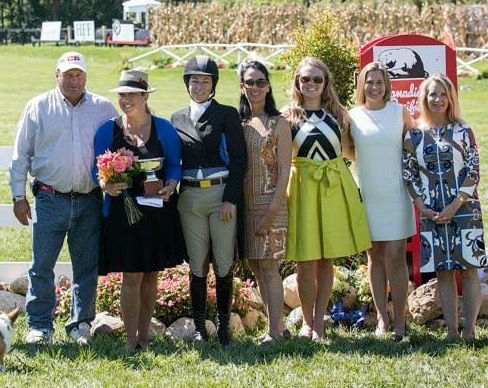 Michelle Durpetti sits on the Chicago Hunter Derby’s public relations and marketing committee and spoke of her family’s sponsorship at that event, as well as at other upcoming competitions.

“We choose to support the Chicago Hunter Derby because of the three great charities, but also because I love to support the industry that Greg (Franklin) and Caitlyn (Shiels) are in, and that my horses are in,” explained Durpetti. “That is also why Greg and I team up on sponsorship opportunities, including the upcoming Capital Challenge Horse Show.”

In October, Canterbury Farm and the Durpetti family will be the presenting sponsors of a brand-new competition at the Capital Challenge Horse Show (CCHS) held September 26 through October 4 at Prince George’s Equestrian Center in Upper Marlboro, MD. The $2,500 WCHR 3’3” Junior Challenge, presented by Canterbury Farm and the Durpetti family, will serve as a fantastic addition to the elite competition showcased during the USHJA’s World Championship Hunter Rider (WCHR) Final classes throughout the week. Canterbury Farm will be well represented at the CCHS, as Shiels is currently leading the WCHR Regional Rider standings for developing professionals. 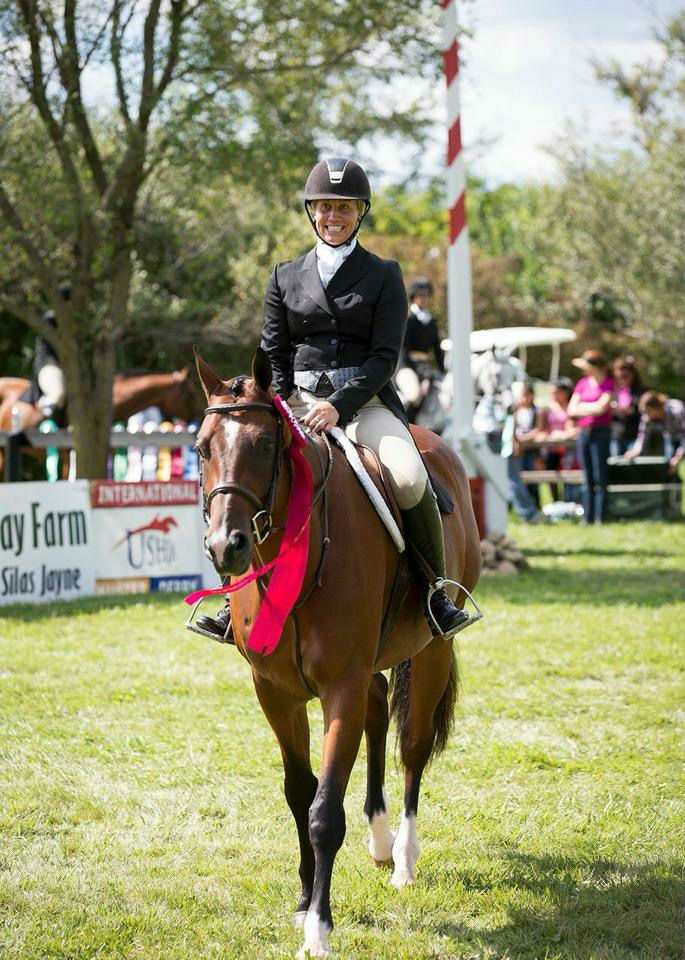 Along with its support of the Chicago Hunter Derby and the Capital Challenge Horse Show, Canterbury Farm is also a sponsor at the Illinois Hunter and Jumper Association (IHJA) Year-End Finals as well as the IHJA Year-End Banquet, which celebrates the achievements of the season’s top horses and riders. The IHJA Year-End Finals are held in September at Lamplight Equestrian Center, just a 20-minute drive from Canterbury Farm’s home base.  Lamplight also hosts the Showplace Spring Spectacular Horse Shows, where Greg Franklin and Canterbury Farm have generously donated the Monica Fowler Memorial Equitation Perpetual Trophy, which is presented to the leading equitation rider throughout the Spring Spectacular series.

Franklin has been a part of equestrian sport since childhood and feels that it is important to help the sport that has been such a major part of his life.

“Having the privilege and pleasure to be a part of this industry for over 30 years, it feels immensely fulfilling to support and give back on a local, regional and national level,” said Franklin. “Supporting the IHJA is something I will always do because local competitions offer a great place for equestrians to start, as my sister and I did many years ago, and the Chicago Hunter Derby is arguably the most gorgeous stand-alone derby in the U.S. The course is challenging for horse and rider, and all of the efforts go to support three wonderful organizations, which are a great combination of Chicago and equestrian.”

Franklin’s enthusiasm expands to the CCHS.

“I love supporting great ideas, and this sponsorship for the 3’3 Junior Hunter Challenge that Canterbury is sharing with the Durpetti Family Foundation is a great idea!” said Franklin. “Canterbury Farm is so proud to contribute back to the industry that has allowed my family the opportunity to do what we love for more than three decades. It just feels right, and we are very grateful to have clients that support not only our efforts, but the places that we support as well.” 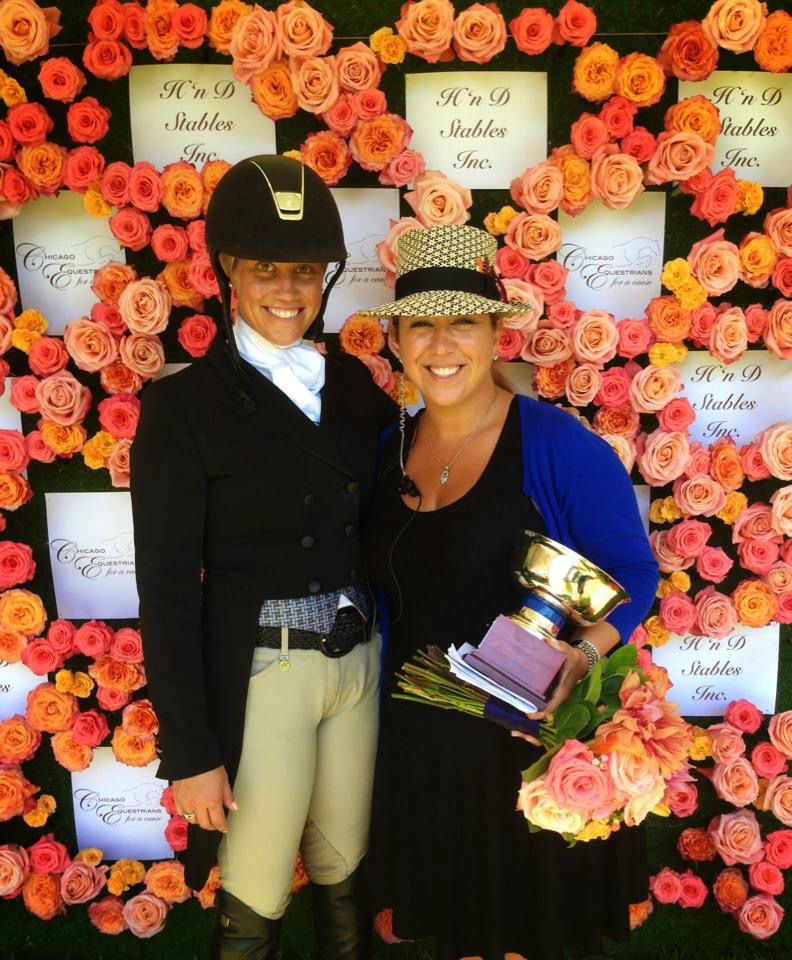 While Canterbury Farm is extremely generous in its sponsorships, it is also well-supported by its own team of sponsors including Blueberry Hill, Butet, Equifit, Ardie Hastey, O’Shaughnessy Apparel, Samshield, and Tucci for all of their support.

Tickets for the Chicago Hunter Derby can be purchased online at www.chicagoequestriansforacause.com.

About Canterbury Farm
Canterbury Farm maintains a horse show schedule on a local, regional and national level that is created with their customer’s competitive goals in mind. For over 35 years, Greg Franklin has ridden hunters and jumpers to numerous championships nationally and has brought home numerous Zone 5 ‘Horse of the Year’ awards. Franklin has qualified horses and riders for the Pennsylvania National, Washington International and the National Horse Shows including the Medal and Maclay Finals. He has also shown internationally at Canada’s Spruce Meadows in the 1.40m and 1.45m divisions and is a certified trainer with USHJA. Additionally, Franklin holds his ‘R’ card in Hunters, Hunter Seat Equitation, and Jumpers, and judges throughout the country.

Born and raised in Sheffield, Massachusetts, Caitlyn Shiels began riding at the age of eight. A highlight of Shiels’ early career was being a team and individual gold medalist at the 2004 North American Young Riders’ Championship. Shiels went on to apprentice under such professionals as Andre Dignelli, Mclain Ward, Ken Smith and Kate Stoffel-Oliver. Almost immediately after she joined the Canterbury team in 2013, Sheils and Franklin both began earning multiple championships at major shows including Spring Spectacular, Horse Shows by the Bay, Traders Point Charity Horse Show, and Kentucky. Their partnership is an excellent balance of training both on the horse and from the ground.